YOU WILL BE MY WITNESS

Acts 1:8 “But you will receive power when the Holy Spirit comes on you; and you will be my witnesses in Jerusalem, and in all Judea and Samaria, and to the ends of the earth.”

After Jesus died on the cross, He was resurrected and taught his disciples about the Kingdom of God for 40 days. Then He left them this one word before His ascension. Jesus promised His disciples that the Holy Spirit will come and give them the power to be His witnesses to the whole world. I have been praying to see God’s vision. And so perhaps with these prayers, God allowed me to visit Nicaragua, a place where I had always wanted to visit at least once in my life.

On January 14th, 2020, it was possible for me to visit Nicaragua after the Brazil conference. This is a report of the wonderful work God has done from January 23 to March 21.

After the Brazil conference, I went to Costa Rica but my flight had been delayed for a day. Missionaries, Kim Huan and Rebecca, welcomed me warmly. I had been praying for a long time for Nicaragua, and being there felt like a dream. The missionary’s house and UBF Center was only a 5-minute walk. There were big mango and coconut trees in the Center, and the mango I tasted there was one of the most delicious mangoes I ever had.

Nicaragua UBF members welcomed me very warmly and I felt like it was home. Even though it was our first time meeting, it did not feel awkward at all. The next day, I had a bible study with new students, Amy and Keyling. Missionary Rebecca translated for me and we were able to communicate without a problem.

In the evening, the shepherdesses and I prepared a special song. There was no piano accompanist and I served the Sunday service as a piano accompanist.
The first worship service message was on John 1. I did not understand Spanish but I could understand the message because of the Bible Study I had with the sisters.
Every week the groups were divided into groups for new students and leaders. The new students studied Genesis while the leaders studied the Gospel of John. There were many sisters so it was not possible to have one to one Bible studies, but we were blessed by the group Bible studies. Missionary Rebecca Kim served in the Korean language program at UNAN National University, so we had good relationships with the sheep who later became leaders. I followed Missionary Rebecca and at times I was given the opportunity to teach the basics of music theory and vocal music. Then after class, those who wanted to study the Bible would remain.
When I promised to teach students the piano for free, many students showed interest and would wait for their piano lessons. It was touching to see even a student who stayed 2 hours away from the Center to come. (Missionary Rebecca took advantage of the students who were waiting to learn piano by teaching the Bible to them.) 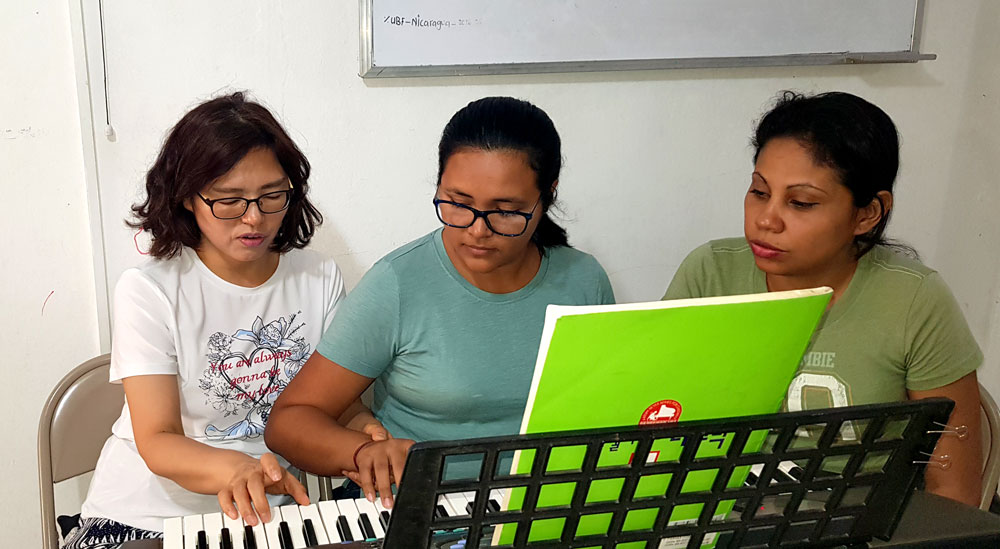 Five UBF shepherds each had about 5 to 6 students and gave them individual lessons twice a week. I brought a textbook, which I had from a small piano academy from 10 years ago in Korea, and it was used well here. After the Sunday worship service, we would have lunch together and then have choir practice together. We had to find songs through the internet and then translate the songs into Spanish, which was not an easy job. It was difficult to sing these songs because most of the students in Central America were not taught how to read music and did not have absolute pitch. We could not divide the choir into 4 parts, but 2 parts, which was also difficult.

Missionary J*uanKim asked all the shepherds to write their life testimony on how they were saved and called by God. Missionary Rebecca and I reviewed each person’s life testimony and suggest them to rewrite their testimonies more sincerely if they could. Though it was not easy for them, they spent more time writing testimony deeper. The students had many pains and weaknesses such as lusts, hatred, poverty, and yet I could find hope when they repented their sins before God. Writing life testimonies were difficult, but I could give thanks to God for them when they dedicated their lives to God. As I had lunch/dinner fellowship with the 10 sisters, we could thank God together with joy for what He had done. 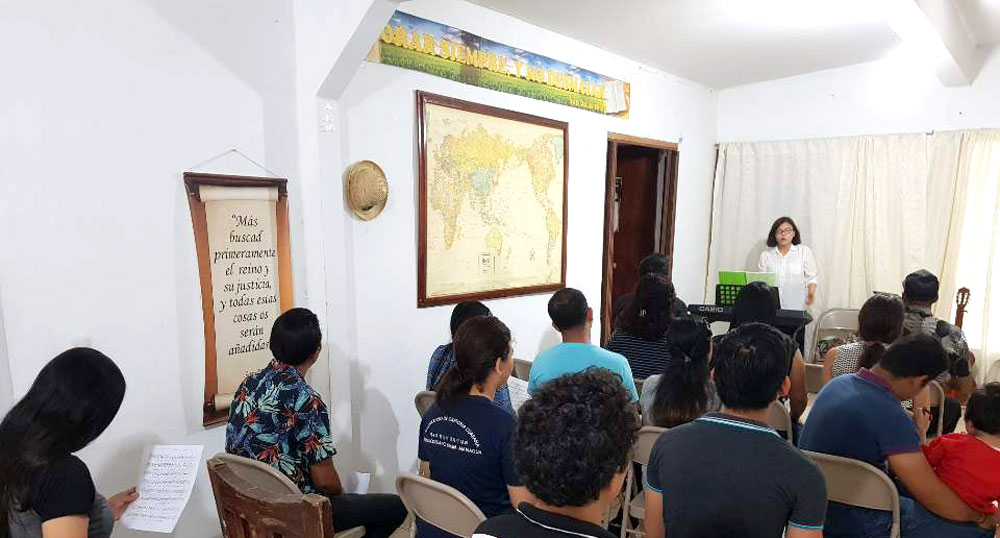 Missionary J*uanKim had early morning prayer with Mariano and Jonathan. As a self-supporting missionary, he would go to work during the day and serve one to one Bible study with the shepherds after work. He would challenge them to continue their spiritual fight against sin.

I am thankful to God who has used him to establish UBF ministry in Nicaragua since 2006 and has shared the Word of God to many others until now. As I was able to experience Missionary Rebecca’s life and the many crosses she is carrying, I could learn how much she loves her bible students and is patient with them even in their weaknesses.

The Central America Conference in Honduras was postponed to August due to the worldwide COVID-19 pandemic, which spread very quickly. Although I was meant to attend this conference before going back to Korea, it was not possible as the airports closed down and flights were all suddenly delayed. I had to reissue a new ticket, stay in LA for 5 days, and then return to Korea.

Reflecting on all this, it all feels like a dream. I can vividly remember all the faces of the missionaries and sheep, for whom I pray. When praying for the world mission, I pray for them first. I hope to continuously support and serve the Nicaragua mission through prayer. Also, I regret that I had not studied Spanish before going to Nicaragua. Currently, I am studying Spanish with Missionary Sandra. This is only the beginning but I hope that when there is another opportunity to go as a short-term missionary to Central America, the Spanish I'm learning will be helpful. 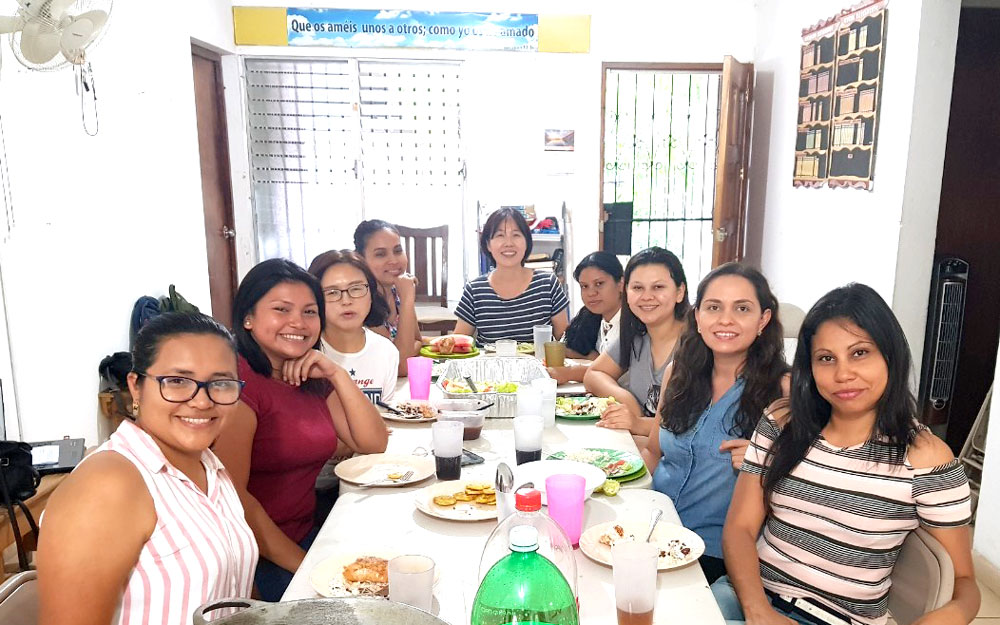 Recently, Missionary Rebecca asked me about doing an online Bible study with the sheep there. At that time I was not ready, but after some thought, I realized that many things are possible online and this is a good opportunity to serve world mission in Korea. So, I am preparing to do Bible study with them. Not only Nicaragua but the whole of Central America is a land of hope for a harvest.

I hope to see God’s way and trust that God will make a way. I give thanks to God for everything and give only Him the glory.

One Word: When the Spirit comes, you will receive power to be Jesus’ witness