TO THE ENDS OF THE EARTH

We praise and thank God for richly blessing Indonesia UBF ministry with many growing disciples for the last 30 years, using the sacrifices of our missionaries although we were weak with many faults and mistakes. God also abundantly blessed the joint conference for the 30th anniversary on May 31 - June 3, 2019, at Forest resort in Jakarta. All together 250 people attended from Depok (158), Jakarta (2), Zzawang (7), Bbanzzoran (36), Bbasarmingu (26), BSD (7), Kkarawachi (3) and overseas (11). God also blessed us all with a new vision and hope for the next 30 years through the celebration.

The conference started with powerful praise led by leaders from Zzawang & PMC UBF. The opening message, “Put out into Deep Water, and Let down the Nets for a Catch” (Luke 5:1-11) was given by Rama (Zzawang UBF). The evening message, “Get up! Pick up Your Mat and Walk” (John 5:1-18) was delivered by Nico (Bbanzzoran UBF). 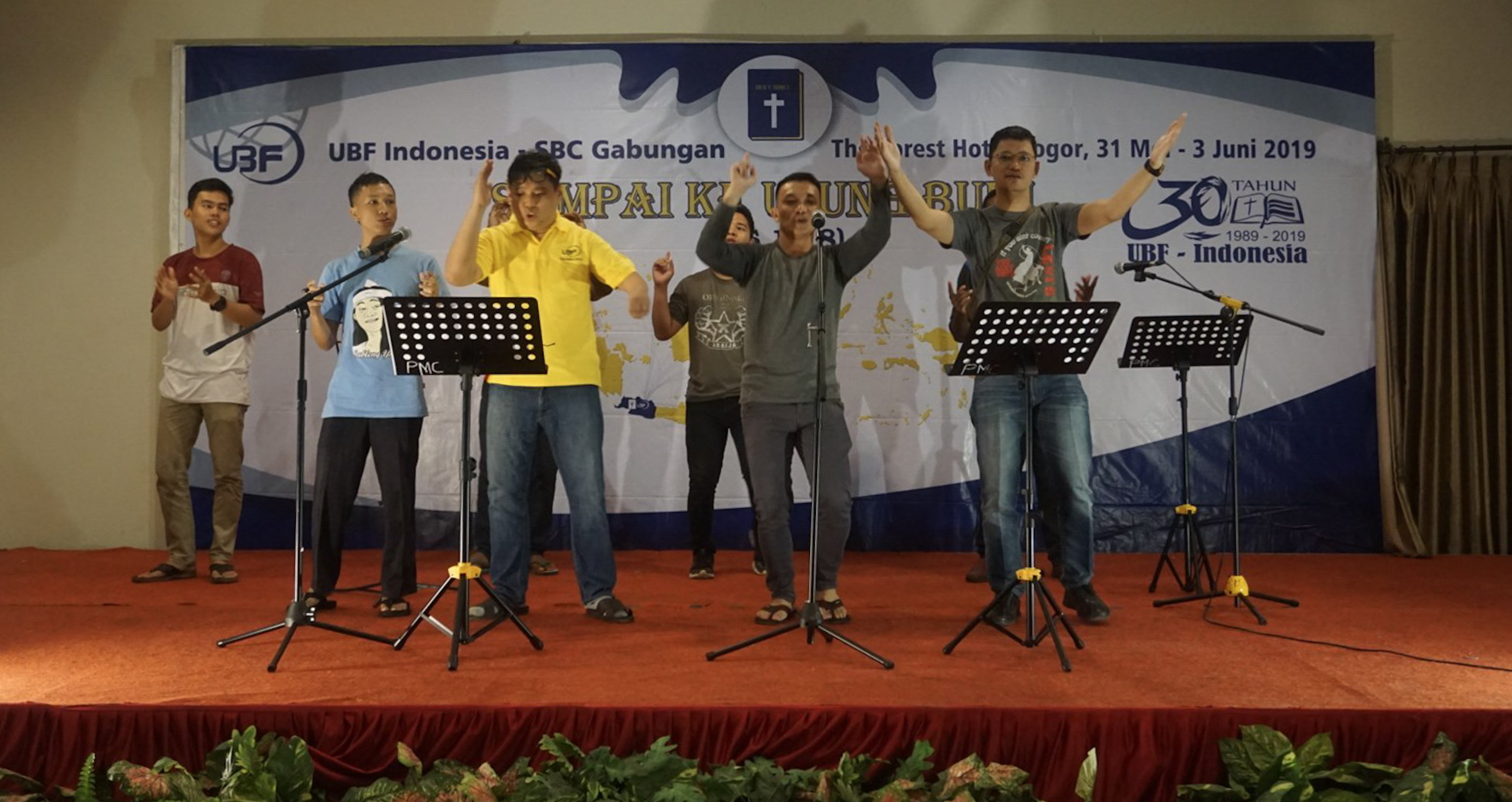 Afterwards, 3 testimonies and life testimonies followed. William (PMC) revealed Jesus, the living water welling up to eternal life. Ritree (Bbanzzoran) testified God who is so pleased with him based on Genesis 1:31 and earnestly prayed for taking care of God's flock. He established a house church with Rolli in 2016. Zzerdic (Zzawang) through his testimony, witnessed God who saved him from the darkness of life and made a resolution to be a faithful man of God by obeying Matthew 6:33. Andrew (Depok), like a wandering sheep due to his academic failures came to know Christ through faithful one to one Bible studies and was able to graduate by God's grace. At this conference, he decided to obey one word of God simply, “Put out into the sea and let down the nets for a catch."

Zzitta (Depok) shared her testimony that she learned about secret of being obedient to the Lord through one to one, and got a scholarship from her school and brought her sister to Jesus, too. She prays that she may reveal God’s glory through her life.

KoKo (Bbanzzoran) confessed that his life had failed as like Peter who didn’t catch anything after he had worked hard all night. He decided to live by faith as a fisher of men.

The second day morning’s  main lecture 1 “The parable of the lost son” based on Luke15:11-34 was given by Sh.Seto (Lydia is his wife).

The evening message “ Neither do I condemn you” (John 8:1:11) was delivered by Sh. Iman (Sebti is his wife and they have 3 children). He invited many students to the conference as a fellowship leader.

On the second evening, 6 shepherds shared their life testimonies.

Sh. Worlderar shared the grace of God who brought him out of drug addiction. He decided to feed campus sheep based on 1Cor. 15:58.

Sh.Santi (Depok, A media reporter) has come from a background in which his family has been disrupted and his life has been in turmoil in his early years. After coming to know Christ, he became a shepherd, feeding campus sheep.

Sh. Esther (the wife of Sh. Riduan who is the ancestor of faith in PMC) had been abused by her father when she was a little girl. After coming to know Christ, she forgave her father and became a shepherd for lost souls in campus.

Sh. Sudarman was in deep darkness since he had to live alone, separated from his parents in his young age and went through hardships of failing his entrance exams for high school and college as well. But after coming to Christ, he experienced God’s help and he lives by faith in God who loves him.

Sh. Pera (Depok, Nurse) grew up in a very poor family. In order to support her family and her school study, she had to go out to the streets to sell cookies in her early years. But after meeting Christ, she graduated from her school as the valedictorian and became a powerful shepherd for campus souls.

Sh. Jacob was born into a Christian family, but he was far from the gospel. He became a trouble maker to fight against everyone and squandered his youth in wild living. In 2017, through one to one Bible study he changed into a new creation and became a shepherd for campus souls. 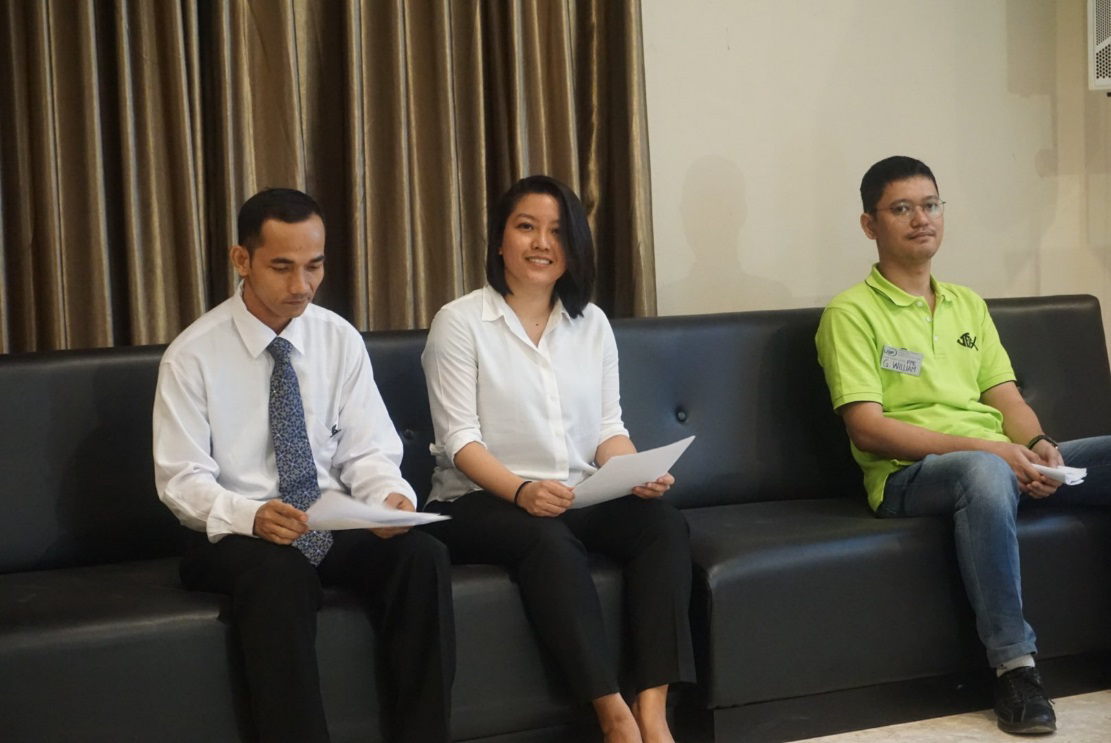 On the third day,  Lecture 2 “Father forgive them” was given by Sh. Donald (Depok) as the Sunday message. With many tears, he testified to Jesus who shed his holy blood on the cross for his and all of our sins.

After the message, Sh. Moses Lee (Director of Korea UBF) who came to bless our 30th anniversary gave a benediction on all the attendees.

After finishing lunch,  Sh. Moses Lee gave a special lecture for all our missionaries based on the word “Rather, train yourself to be godly” (1Timothy4:7b)

On the third day, the  evening message “To the ends of the earth” based on Acts 1:8 was delivered by Sh. Johnnes.

Through the message he revealed the heart of Jesus who wants his disciples to go to the ends of the earth and save all people through the gospel. He also presented how pioneering work of Indonesia UBF started by M. Andrew Jung in 1989, and how M. Peter succeeded after him, and how God has done great things through Indonesia UBF for the last 30 years.

After that, two missionaries who were sent from Indonesia UBF gave their mission report. M. Joanna was sent to Q nation in 2008 and she has been sacrificially serving God in the nation and coworking with Korean missionaries as well.

M.  Epirin Priscilla was sent to USA in 2006 as our first missionary and she and her husband are coworking with M. Abraham Nam in Eau Claire UBF, USA.

After then, M. James Park who was sent by Sinchon UBF Korea shared his graceful testimony. He prays 1. To master Indonesian language 2. To get a self-supporting job. 3. For his wife to be a good coworker.

And there was a presentation of all the memorable pictures of Indonesia UBF pioneering work since 1989. And these were followed by congrats messages starting from M. Moses Yoon(GD), Sh. Moses Lee(Korea Director), M. Mark Yang, Dr. Joseph Ahn, Dr. James Suh, P. Abraham Kim (Former GD), M. Paul Gwon (Asia Coordinator) and many other servants of God.

And then a UBF thank you-tablet was delivered to M. Andrew Jung for his first pioneering work in Indonesia UBF. He gave glory to God for the great work of God in Indonesia for the last 30 years and said,  “He is honored to receive the thank you-tablet”. After that we all prayed together giving thanks to God who has been using us mightily even though we don’t deserve it.

Our part one ceremony of the 30th anniversary was finished by Dr. James Suh’s thanksgiving & giving glory to God and earnest prayer for the next 30 years of Indonesia UBF ministry. 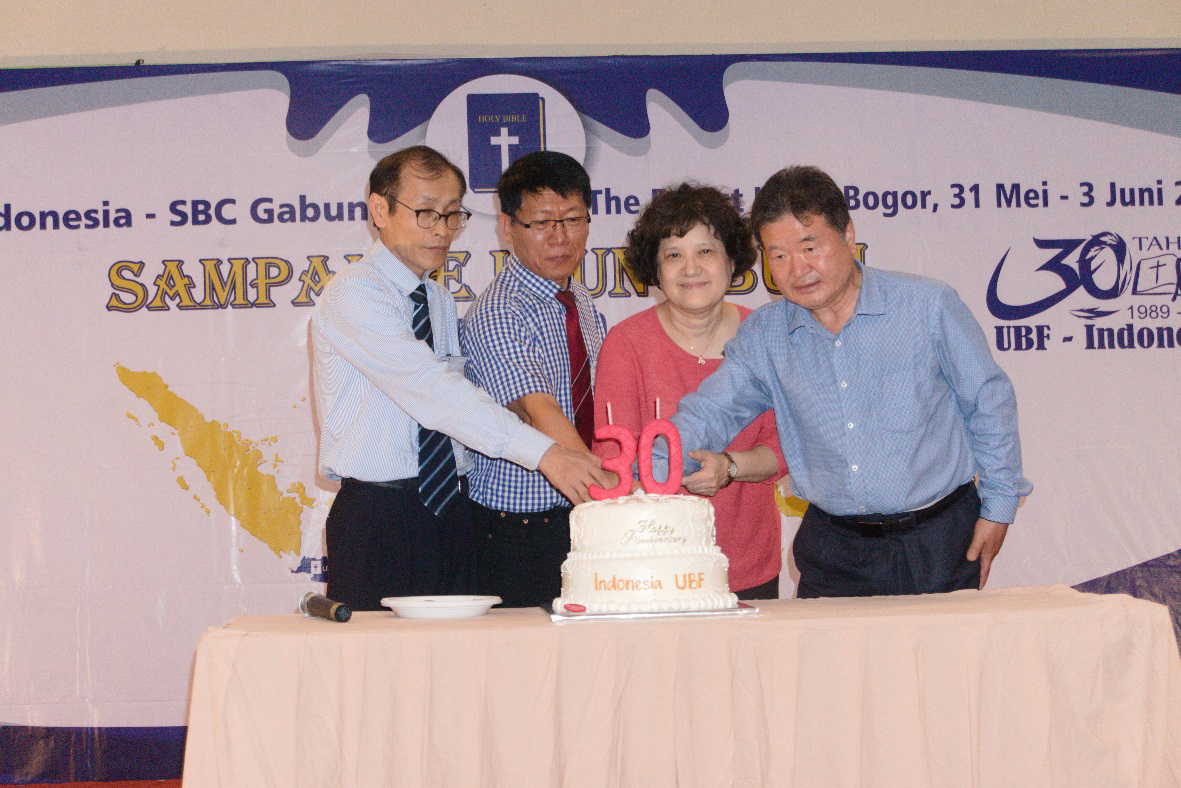 Indonesia UBF 30th anniversary ceremony part 2 started with cake cutting by M. Andrew Jung & M. Peter Lee and with thanks and praise to God. The first cakes were  delivered to all the growing sheep with our prayer for them to succeed Indonesia UBF ministry in the next 30 years as next generation leaders. 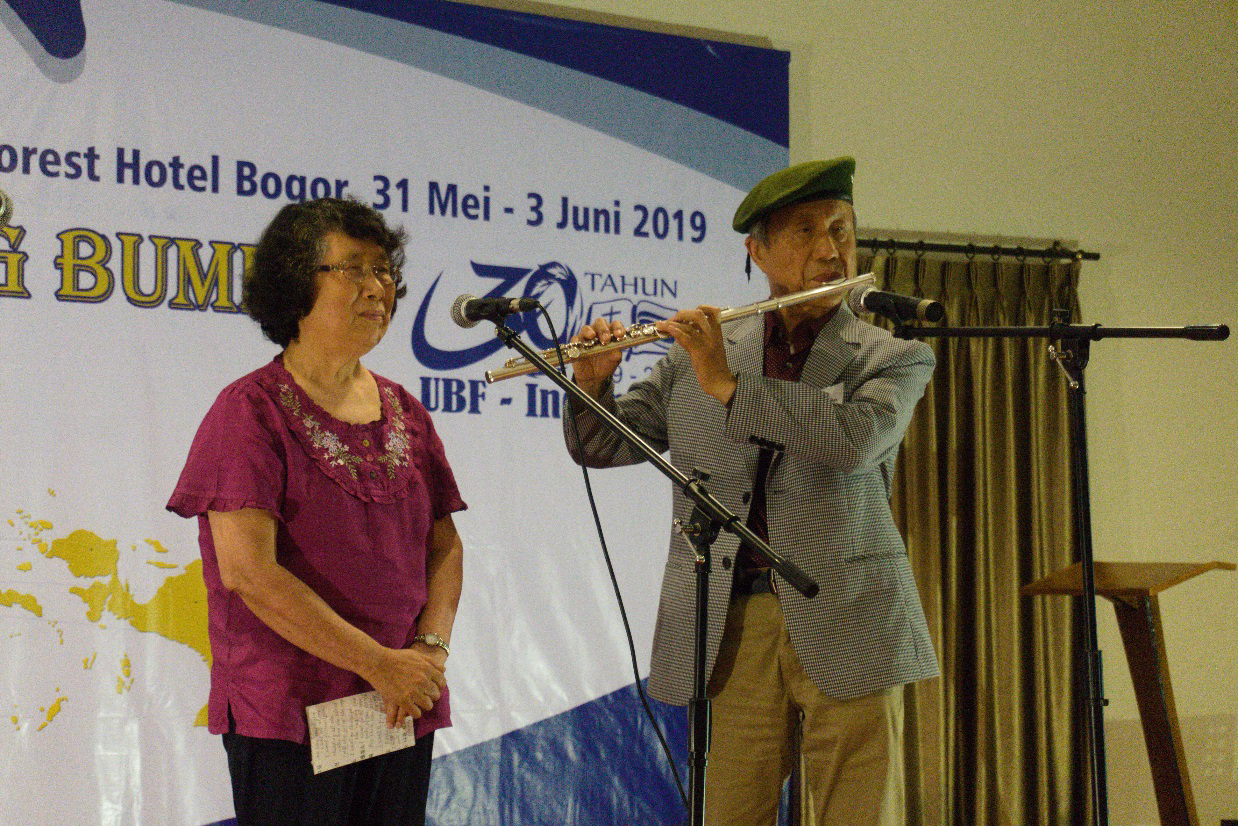 Many other special programs followed: a special song prepared by CBF, a powerful gospel medley by PMC coworkers, a dance by Bbanzzoran coworkers, a special song by Depok seniors, a traditional Ttorttor & Sazzozzo dance by Zzawang coworkers. This part of the celebration made everyone one in heart to praise and thank God. 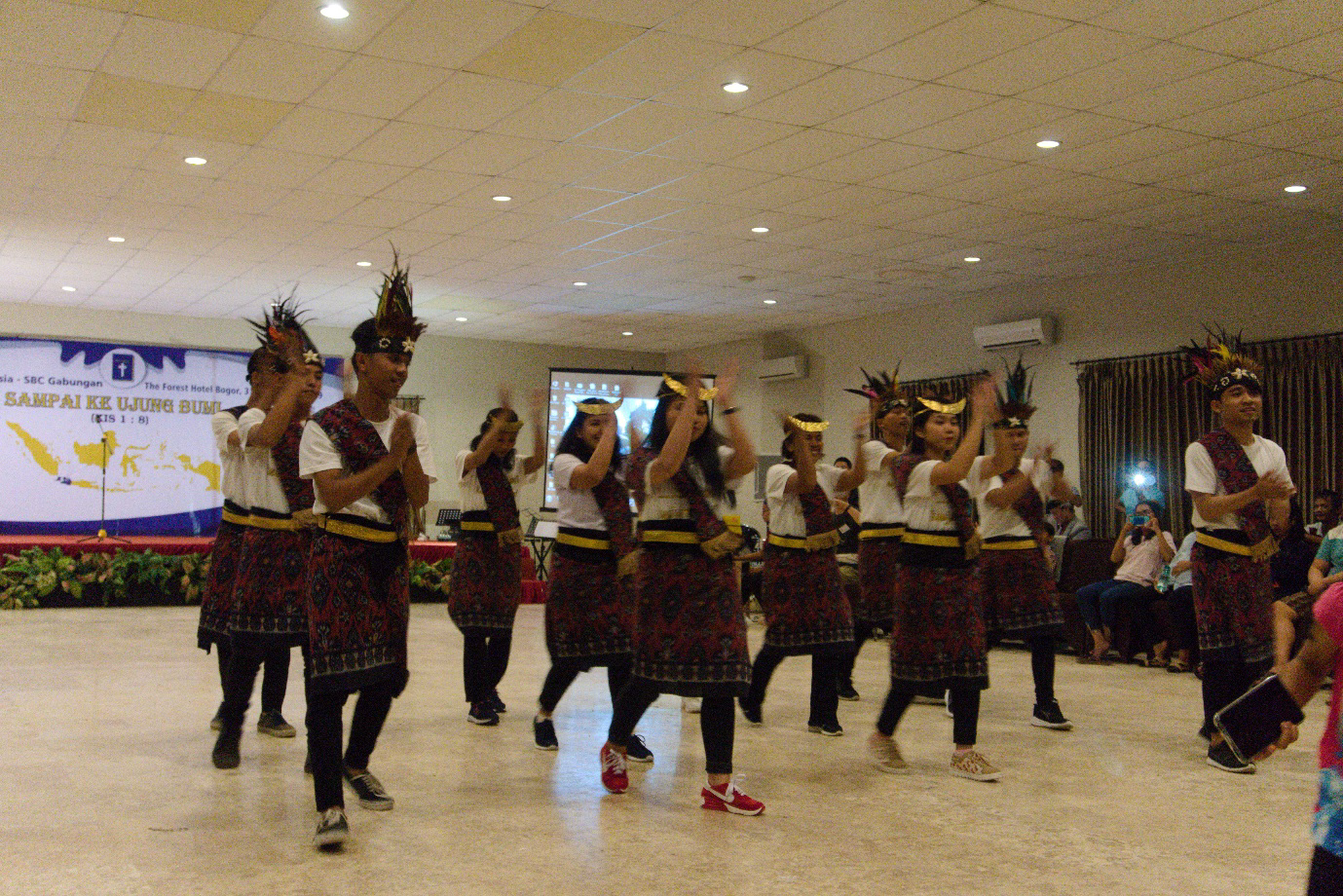 The fourth day’s  morning main lecture 3 “Do you love me? based on John 21 was given by Sh. Riduan as the closing message. Through the message, he testified to Jesus who reinstates his disciples in a loving relationship with him after their failure. And Jesus also gave us all new mission saying, “Feed my sheep”.

Sh. Riduan also gave us new prayer topics to look forward to the next 30 years of Indonesia UBF as our future direction:

In order to achieve these prayer topics, he encouraged all Bible teachers in Indonesia UBF to participate in the one to one discipleship ministry. With these prayer topics, we all earnestly prayed to God to use our ministry continually up to 30 years, 60 years, 100 years until the day of the Lord and with this prayer we finished the conference. 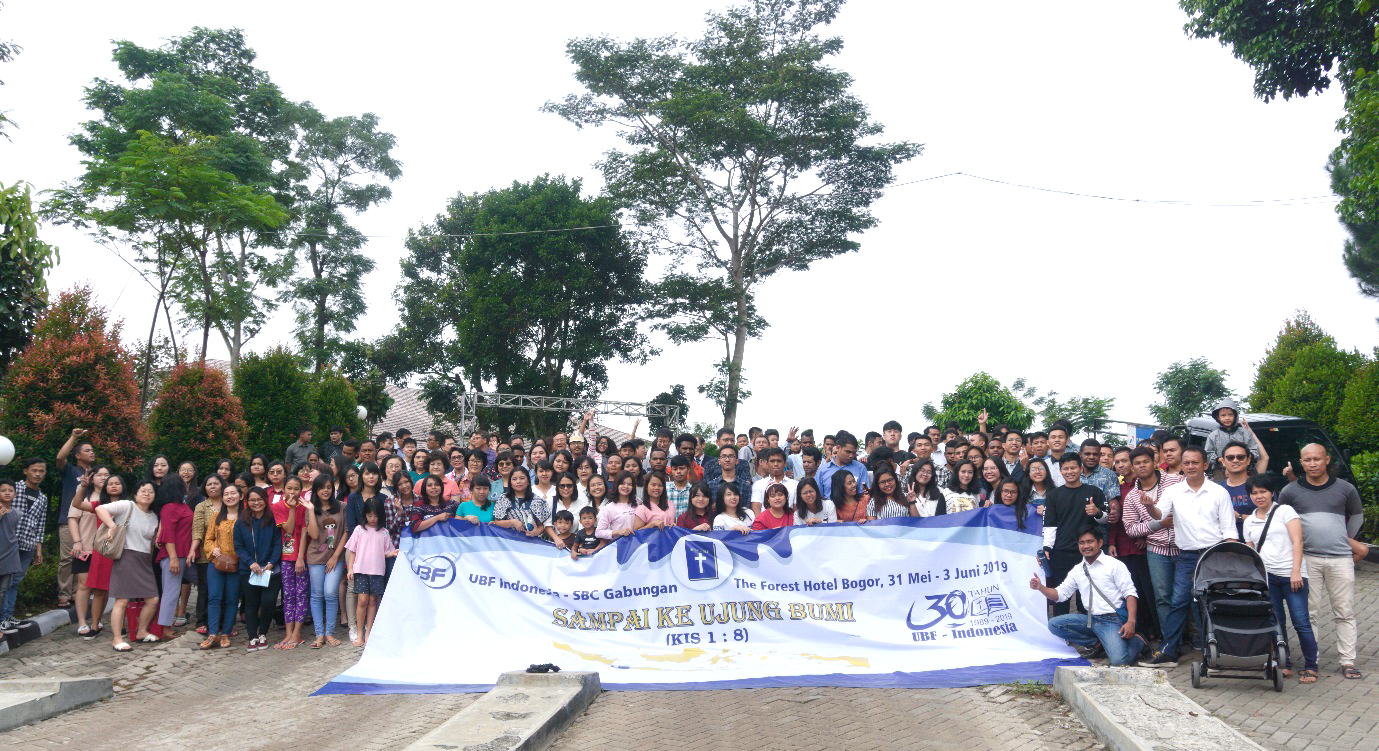