We, M. Rebecca and I visited Oceania from 12/29/2018 for 19 days. We participated in 2019 New Year director’s conference in Brisbane, Australia. They called it missionary and shepherd conference. As you know, Oceania is consisted of two countries, Australia and New Zealand. Canberra is the capital city of Australia, and Wellington is New Zealand’s. After conference, we visited 7 chapters in 5 cities. They are Brisbane, Sydney (Macquarie, Sydney West, Sydney), Canberra, Melbourne in Australia, and Auckland in New Zealand. Australia and New Zealand prayer topics are pioneering of 40, and 7 campuses through the gospel of Jesus respectively. There are total 13 families with 34 children.

We visited these chapters for “Teachers and Parents Education (T&PE).” Through the serving CBF ministry for several decades, we learned that we need teachers and parents education in order to raise godly children and revival of Christianity in homes and churches. Teacher’s passion and ability to teach, and parent’s spiritual role model are essential for our growing children. So we prepared 5 lessons for both and shared with our precious missionaries and natives. The lessons are 1) The godly family in the world mission (Gen 1:28), 2) Children ministry (Lk 2:52), 3) Family discipleship (Dt 6:5-7), 4) Teacher’s self-development (1Pe 5:2-3), and 5) Family worship (Jos 24:15b).

During the conference, by the request by M. Mark Lee, the Oceania coordinator, I delivered 2 special lectures: 1) The godly family in the world mission, and 2) Children ministry. After that, we visited each chapter and shared two lessons, “Family discipleship,” and “Family worship” respectively. Our main point of visiting is family discipleship through the family worship in each family. Also, we attended 2 worship services at Macquarie and Melbourne. M. Rebecca shared her life testimony in both places and encouraged our co-workers with prayers. 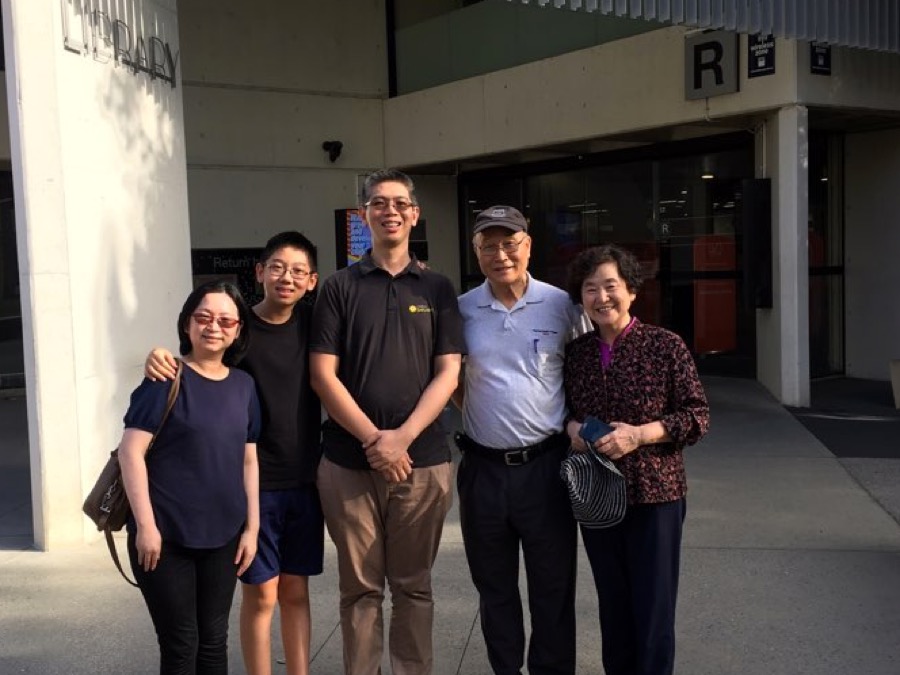 They are Chinese and came from Hong Kong UBF for 4 years ago. Husband and wife are both Ph.D. from HK University. When M. Carol got a faculty position to teach the Construction management at Queens Land Univ. of engineering school in Brisbane, M. Michael accepted it as God’s will that he began to serve God as a full time gospel worker. He diligently visited campus, find sheep, teach the word of God and bring them to Sunday worship service. Currently he has 4 sheep to follow up. He made a spacious Bible house in their first floor hoping to bring many sheep, and they live in 2nd floor smaller place relatively. Both of them are studying Bible with P. Kevin and Dr. Maria Albright by skype every week.  Due to parent’s good role model in faith, their older son, Daniel gets along with his parents very well in serving God and their guests. According to his mom, Daniel mostly scheduled our traveling for 5 cities with 4 times airplanes and one time of Greyhound bus. In between cities’ traveling, leaving after lunch and arriving before dinner along with cheap tickets, in this way M. Ho’s family helped and guided us to Oceania God’s work. In a word, they are well trained missionary family with the godly parenting, and practice the gospel with the love of God.

Macquarie chapter has 3 missionary families: Mark & Ruth Lee with their 2 adult sons; Moses & Mark, and John & Faith Jun with 3 children: Grace, So-won, & David, and Daniel & Mary Lee with 1 daughter, Mary. There is one faithful shepherd Chris Beaumont whom they work together and praying for Macquarie Univ. pioneering. On Sunday, they rented a place near the campus and worshiped together. We met John Jun Jr. who was at Chicago to study college a long time ago, with his family. He is preparing his final for nursing school.

Sydney West chapter has 2 missionary families: Moses & Esther Kang with 3 children: Esther, Rebekah, & David, and Dr. David & Sarah Park with their 3 years old son, Noah. And shepherd Uche Ngwada from Nigeria. We are so glad to meet Dr. David Park Jr. who was Chicago CBF alumnus 20 years ago with his wife and son.  Dr. David is a well-known fisher of man that he brought Chris Beaumont in Macquarie, and Uche Ngwada from campuses.

Sydney chapter has one missionary family, Aquila & Priscilla Lee. Missionary Aquila is a famous photographer in Australia. They have 2 adult children: Anna & Paul. Anna married to Andy Yoo several years ago. They are the oldest 2nd generation in Oceania. Their son, Paul took over his father’s ministry, and serves Sunday messages with Andy and his friend Jimmy together. We heard that Sydney chapter called for all Australia 2nd generation conference at Sydney before 2019 directors’ conference at Brisbane. They are praying for Sydney University pioneering. We pray for 3 young leaders: Paul, Andy, and Jimmy that God may raise them as men of mission to follow their parent’s world mission calling.

Canberra chapter has one missionary family, Joshua & Hannah Lee with their daughter, Hanna who just married last month with David Lee of Buffalo, US. M. Joshua is a licensed translator in Australia, and M. Hanna is a nurse. They are praying for Australia National University to be pioneered. They had been coworking with Dr. David Park when he was in medical school in Canberra. Chris Beaumont originally came from Canberra chapter too. 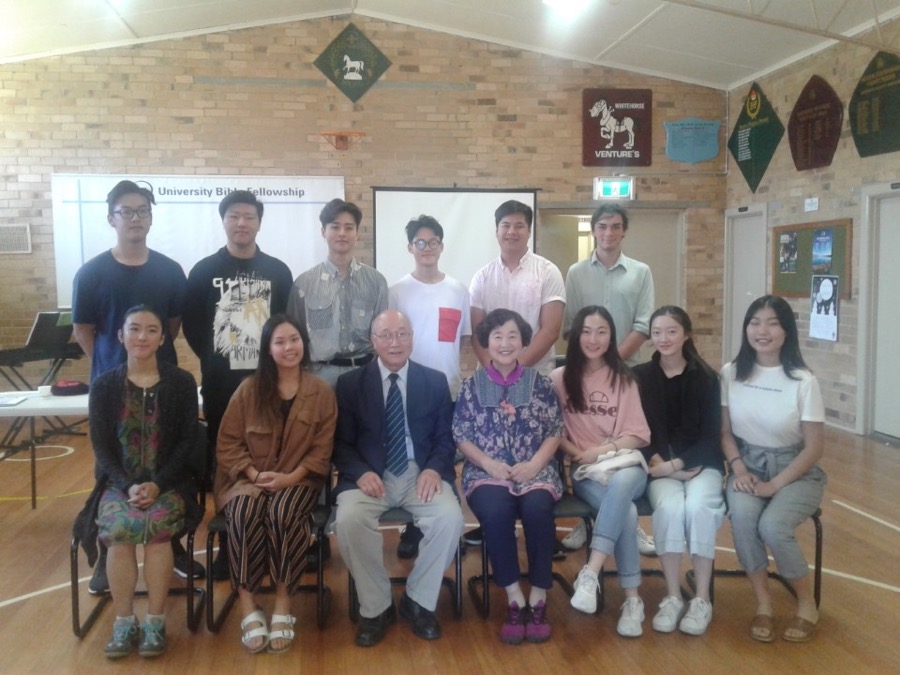 At the first night lecture, there were total 14 including 10 young students. At the second meeting, the attendants were increased. Usually, when we had T&PE lectures, not many young people, but mostly parents and grandparents came. But Melbourne case was quite different though we have been visited many places.

In my curiosity, I asked one of young students, “Did you learn something from my lecture?” To my surprise, he answered, “yea, I learned a lot for my future family.” Wow!!! At Sunday worship service; there were same numbers of young people. Some of them who came early prepared for worship service by arranging chairs, tables, and sing-a-long. I was totally amazed and asked chapter director, M. Joseph Yang for the secret of young people's’ participation and growing. He told me that his 2 children brought their friends more than 10 from their college and high school. They came to study Bible, and on Saturday, they gathered together for group Bible study led by his oldest daughter Sarah & other older girls in Melbourne. She is a pre-med student in Melbourne Univ., and son, Daniel will be freshman this coming March.

M. Joseph Yang continued that they have been having “Family time” once or twice a week. They read Bible passage together, and find repentant and thanksgiving topics, then they prayed from their young ages.

That’s it! This is a form of family worship and family devotion. It is tried and proved evidence of great impact in family worship.

Just before leaving for New Zealand, M. Carol Ho from Brisbane emailed us that they began family worship from last week. Praise and thank God who answered our prayers right away. 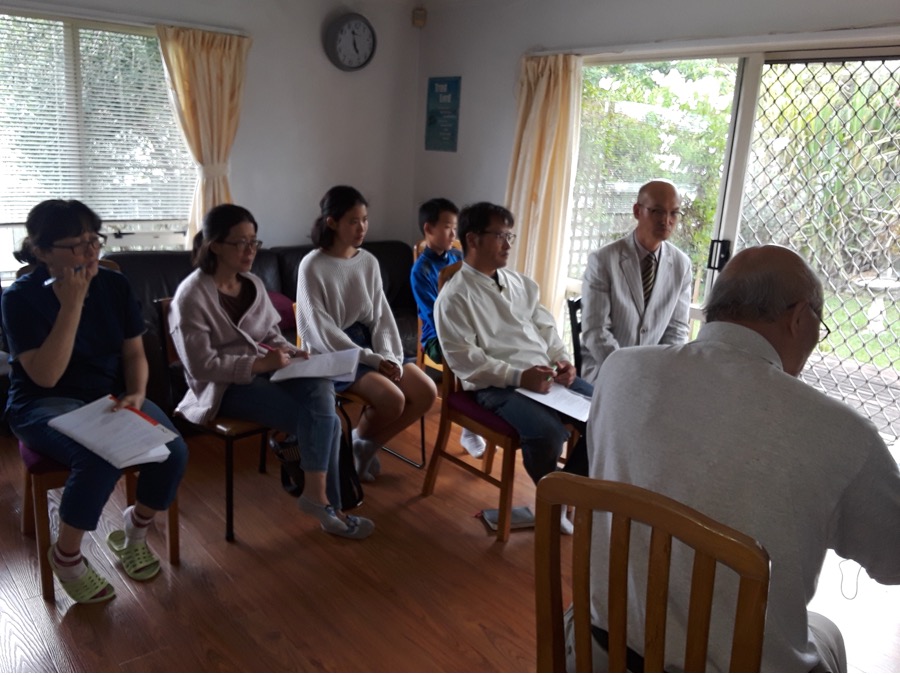 M. Nehemiah & Hanna Lim with their 2 daughters; Joanna & Joy. Their daughter Joy just turned to 14, but she has severe autism that she can’t talk neither think, nor remember her name. M. Hanna has to take of her 24 x 7. Although she was a nurse, she can’t work due to Joy. M. Paul & Maria Kim with their two children came to new mission field at the age of 50 as a full time student when they heard Dr. John Jun’ CME report in Korea that New Zealand government gives working visa to those who come for full time study at University. Furthermore, it will be extended to 3 years after graduation to find a proper job. In spite of their situations and ages, they never despair to live their life of mission but pray for campus mission in New Zealand. I personally admire their life of faith. May God bless their life of faith and have victory in Jesus Christ.

Through this T&PE mission journey, we strongly believe that the revival of Christianity in 21st century must come from family first, and family discipleship is essential.