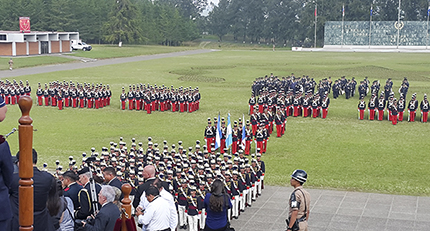 Congratulations on Sara Ham’s graduation! Sara, the eldest daughter of Missionary Josue and Ana Ham, graduated second in class from the Military Academy of Guatemala(Dec 16th). She obtained her diploma from the President ahead of others with several other representative cadets; she also received a certificate of merit from an American ambassador to Guatemala, from Dr. Francisco Bella of officer-engineers club.

Yesterday(Dec 15), Sara also graduated first in class from a college that manages a general educational course for cadets, and so she delivered a valedictory as the representative of the graduation class, and then received a scholarship document for a master course at the graduate school. Praise and glory be to God, who helped her overcome many difficulties by faith as a female cadet !

She and her parents also thank everyone for their prayers. Let’s keep praying that she may be a woman of faith and a good shepherdess of sheep like the centurion, deploying at a nearby unit next January and going through a graduate course too !