(USA) M. Juan Seo's Article was Published in a Newspaper in Korea

I will explore an important and extensive topic “the fruit of mission through spirituality” focusing on partnership, especially the interdependent relationship between missionary sending churches and missionary receiving churches from the perspective of Kingdom vision. A broad concept of mission encompasses all activities of the Church for God’s mission (Missio Dei); however, I will confine this work to cross-cultural mission.

I think that it is necessary to define the concept of “the fruit of cross-cultural mission” before unfolding the topic. If we believe that the Triune God is the main subject of mission and the Church is the coworker of God’s mission, the fruit of cross-cultural mission can be understood as internal and external results produced at cross-cultural mission fields in accordance with the motive and purpose of God’s mission. Concerning the motives of mission, David Bosch, who is the author of Transforming Mission—a classical book about modern missiology—points out that the adequate motives are: the motive of conversion, the eschatological motive, the motive of church planting, and the philanthropic motive; whereas the impure motives are: the imperialist motive, the cultural motive, the romantic motive, and the motive of ecclesiastical colonialism.[1] Concerning the purpose of mission, evangelization is one of the fundamental purposes along with humanization even though there are destructive rather than creative tensions between them from when the concept of Missio Dei has been widely accepted in the fields of missiology.[2] Therefore, the fruit of cross-cultural mission can be understood as the result of creative integration between evangelization and humanization originated from pure motives that follow God’s mission.

The majority of Christians reside in the Global South and modern missionary work is from everywhere to everywhere. Hence, the fruit of cross-cultural mission cannot be produced without partnership between missionary sending churches and missionary receiving churches. The Western cross-cultural mission grew up interlocked with the expansion of imperialism during the 19-20th centuries, planting new churches and raising up local leaders in non-Western countries. However, the partner relationship between Western missionaries and native leaders had not been considered seriously until John Gatu who was General Secretary of the Presbyterian Church of East Africa issued a famous moratorium on foreign missionaries and funds in 1971. Gatu did not claim the futility of missionary work or the isolation of African churches. His intention was to call a temporary moratorium to give time for a reassessment of the working relationship between missionary organizations and the churches they planted. However, Gatu’s claims were frequently misunderstood and attacked as anti-missional and anti-evangelical.[3] His desire was to be an equal partner of mutual cooperation for world evangelization through discovering African churches’ identities and overcoming the dependency on Western missionaries.[4]

South Korea has become a powerful missionary sending country in a very short period of time, and Korean church leaders recognize the necessity of partnership and mutual cooperation with native leaders of mission fields for world evangelization; however, it has not been easy so far. University Bible Fellowship (UBF) is a representative self-supporting missionary sending agency in South Korea. UBF has God’s calling for evangelizing and making disciples of college students in the world and adopts as its mission strategy the Three Selves Principle—self-propagating, self-supporting, self-governing—that is coined by Rufus Anderson and Henry Venn and introduced to Korea by John Navius. The Three Selves Principle was proposed when British and American missionary sending agencies faced financial difficulties with helping foreign churches planted by their missionaries in the middle of the 19th century.[5] The leaders of UBF world mission headquarters have recommended the transfer of leadership in their cross-cultural mission fields from Korean missionaries to native leaders for the fulfillment of self-governing along with self-propagating and self-supporting from around 10 years ago and it has been achieved in many UBF churches. Currently, UBF has an important task of developing partnerships and mutual cooperation between missionaries and native leaders in the light of the context of each mission field.

I joined UBF’s college ministry in Venezuela for around 17 years from 1996. When I delivered leadership to Venezuelan native leaders in 2013, self-propagation and self-supporting had been achieved and self-governing was in the process. However, the severe economic crisis of the country aggravated the church’s finances and the world mission headquarters made a decision to support the church and its leaders financially. This action shows that UBF foreign mission policy can be flexible even though it pursues self-support principle, which overcomes the concern of Paul Hiebert who points out that the Three Selves Principle will disrupt the effective evangelization of financially dependent churches and isolate churches planted by missionaries.[6]

The concerns of native leaders about the political, economic, social, and cultural contexts of their countries can be very different from those of missionaries. The main goal of UBF is to evangelize and make disciples of college students; however, when Venezuela was in great troubles from anti- and pro-government protests, the local leaders challenged the social turmoil by preaching the gospel to soldiers and people in general. Hence, the world mission headquarters encouraged their faith and passion with prayers for their safety trying to understand their contexts and mission theology. Justo Gonzalez, a prominent Cuban Christian historian, points out that when missiologists set up the Three Selves Principle as their goal for the new churches in their mission fields, they could not think of self-theologizing.[7] Hiebert explains that self-theologizing is the new churches’ right to read and interpret the Bible and imagines the formation of transcultural meta-theology through the development of local theologies and dialogues among them.[8] Also, he proposes that missionaries will play the role of mediator between theologians who are concerned about the locality of theology and theologians who are concerned about the universality of theology.[9] I believe that the development of local theologies and the formation of global theology through dialogues among local theologies will widen our understanding of God’s love to the world and provide us theoretical and practical foundations in order to carry out evangelization and humanization as a consequence of cooperative and partner relationships.

Then, what kinds of spirituality are required from us in order to bear the fruit of cross-cultural mission?

First, we should have the spirituality of self-examination that constructs our solid identity. Imitation without constructive critique blurs our identity in terms of faith and theology. Also, if we do not have sharp and candid self-examinations, we will make the serious mistake of transmitting spiritual malaises such as secularism, triumphalism, materialism, and so on to our mission partners.

Second, we should have the spirituality of humbleness for mutual respect. Most of modern cross-cultural mission is carried out in the places where faith and theology have been established already. Missionaries who are outsiders should have humbleness studying and learning carefully from insiders first before transmitting their faith and theology. We can build up our faith and theology when we respect mutually and learn one another through communication and dialogue. World evangelization and humanization can be achieved through genuine partnerships among worldwide churches. 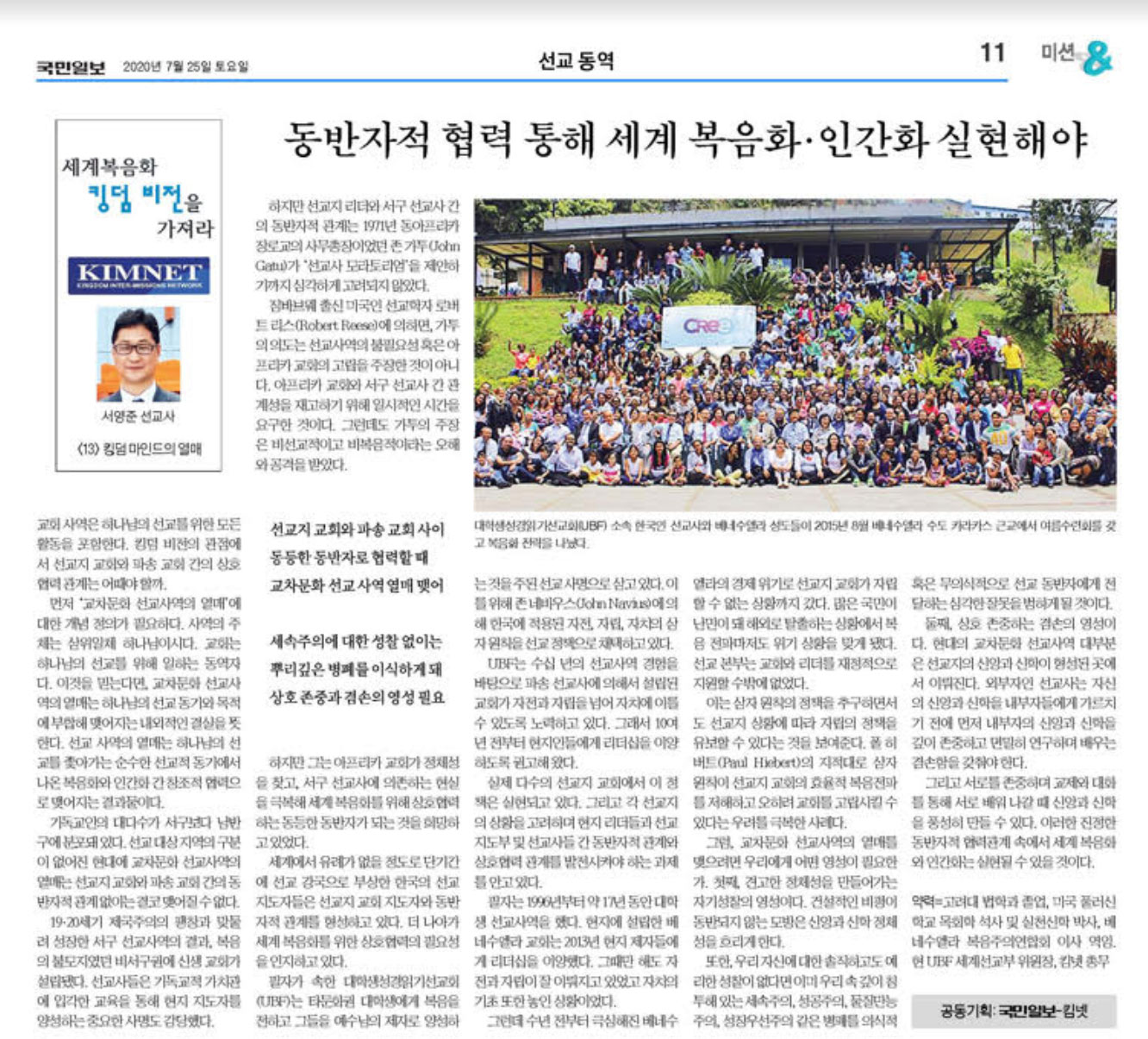