Jakarta, Indonesia UBF held their Easter Bible Conference from April 19th to April 21st. The theme of the conference was "Stand Firm, Let Nothing Move You". The venue was a studio building in Bogor. The total attendance was 31 people, including 7 H brothers and sisters.

On the first day, the opening message was conveyed by Shp. Juni. The message was from Luke 7: 1-17 (key verse 14) with the title, “Young man, I say to you, Get up!” It emphasized that even though our bodies were dead, like the widow's only son, we would rise again when we hear Jesus' voice. After the opening message, we ate tteokbokki and finished our group bible study. One of the four GBS teams was a team specially consisting of H brothers and sisters only. It consisted of Shs. Sam and Shs. Susanti, who were former H, in addition to one H brother and sister who presently attend our Sunday worship service. Our prayer is that through the GBS they had, their hearts and ears  would be even more open to the gospel, especially the resurrection of Jesus, a pillar of Christian faith.

After GBS, the first main message was given by Shs. Eta on John 19: 1-42 (key verse), and it was titled 'It Is Finished'. We learned how Jesus was crucified to solve our persistent sin problem. As we listened to this message, we were deeply moved, each thinking of what the Lord Jesus did on the cross for us. After the 1st main message, we left the studio and went to the mission center. We had a time of fellowship together and then rested after finishing lunch. The special speaker was a preacher who actively ministered in an H place of worship. He is a man in his 40s who accepted Jesus and puts a lot of effort into contextualization. This event became an opportunity for the H brothers and sisters to lose their wariness and have a more open heart.

The next day, the second main message was delivered by Sh. Chris who is from America. The message was based on 1 Corinthians 15: 1-34 (key verse 3-5) with the title, "The Resurrection of Jesus.” He explained that without the resurrection of the dead, there cannot be Jesus' resurrection, and that this issue directly connected with salvation and forgiveness of sins. We returned to our lodging and had lunch fellowship with other H brothers and sisters who had already come and waited.

Then we played a variety of games and had time to build on our relationship with them. 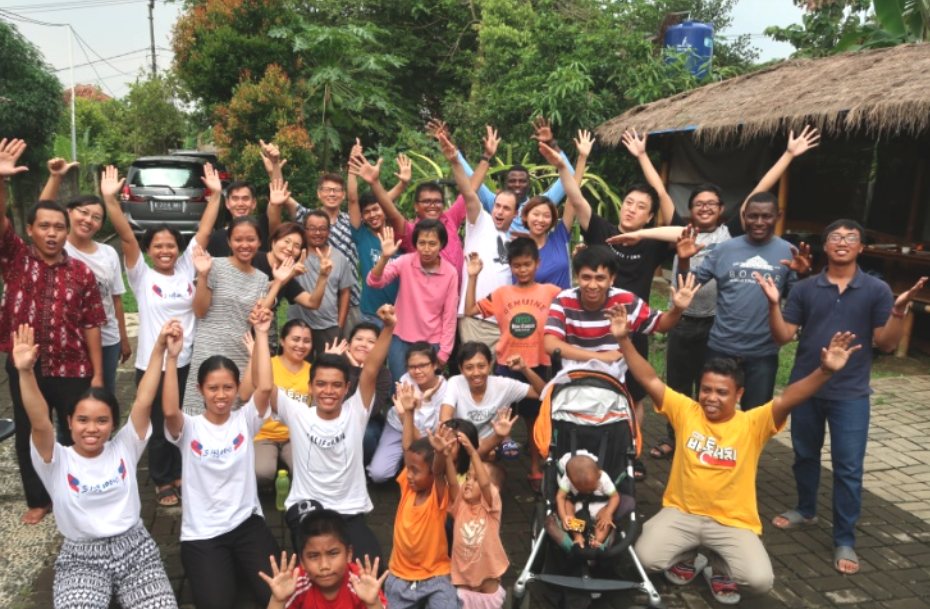 After dinner we went back to the studio. We held a party watching a resurrection motion drama, praise performed by the 2nd gens, and a dance performed by Kalimantan team. We also heard a wonderful Korean gospel song from a young man from Korea and laughed at the comical lip synching of Shp. Chris.

On the last day, the third message was given by Sh. Hengky, the ancestor of faith in Jakarta UBF. The message was based on 1 Corinthians 15: 35-58 (key verse 58) with the title, "Stand Firm, Let Nothing Move You". Finally, communion was served by Msn. Peter Kim. For the last service, we were joined by the couple who owned the venue we borrowed for the conference and who serve children’s ministry.

We thank the Lord for sending eight H brothers and sisters through this conference. We pray for the wisdom and faith to serve them practically and effectively. We are praying for what the next step is to develop a closer relationship to share the gospel. We have now set up four campus Korean clubs (Esa Unggul University, IKJ, UNPAD, UNPAD) and seven strategic fields for evangelism. The eighth field will open in August. Thank God for making a beautiful partnership between the five shepherd families of Jakarta UBF, Msn. Peter Kim, and the growing shepherds.

2. Ministry on 8 campuses, pioneering  to raise up one Abraham and Sarah of faith at; Ukrida, UNTAR, Tri Sakti, Esa Unggul, Atmajaya, IKJ, IPB and UNPAD

5. The spiritual growth of the two H brother and sister attending Sunday Worship Service; and Shepherd oath for two members